Can Wine And Coffee Be Drank Together? Match Made In Heaven? - Wine Turtle

Can Wine And Coffee Be Drank Together? Match Made In Heaven?

Can Wine And Coffee Be Drank Together? Match Made In Heaven? 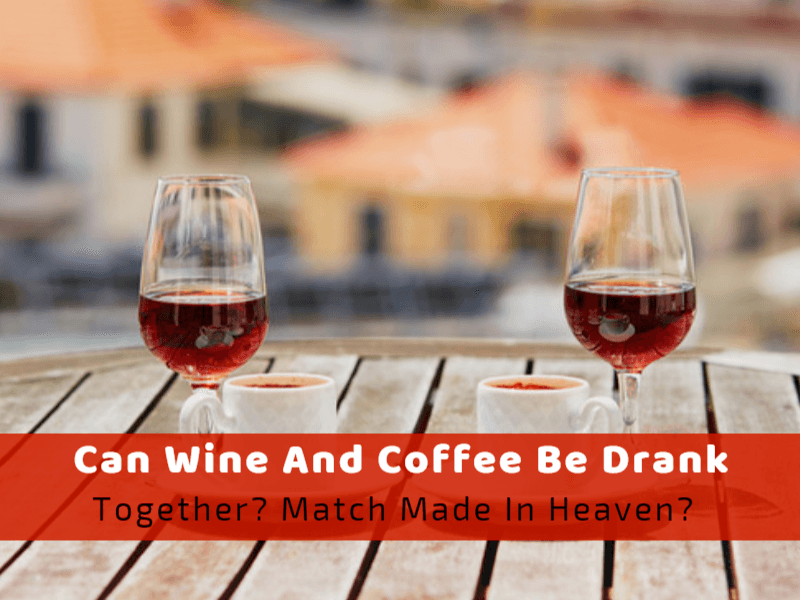 Coffee and wine are both highly aromatic, and you might think mixing them sounds a bit odd. But it actually makes a lot of sense to drink wine and coffee together, because they share a lot of flavor and characteristics.

And while many people enjoy blending their wine with coffee or caffeinated drinks, the question that consequently arises is, is this match made in heaven?

To answer your questions, we’re going to analyze both coffee and wine, and see why they might or might not work together.

Coffee is an infused drink darkly colored, and it is prepared from coffee beans. It is known to have an invigorating effect on its consumers.

To many, coffee has been an irreplaceable drink for quite a long time because after you have a drink, you often feel relaxed which helps you to mingle, be more social with other individuals and also enjoy your time. Coffee seeds are also known as ‘beans.’ When coffee beans are ripe, they are picked and dried.

Depending on the desired flavor, coffee beans are roasted to varying degrees.  The solid particles that form a residue are then brewed with near boiling water to produce coffee.

Undoubtedly, drinking coffee comes with countless benefits. Check out just some of them.

Some Disadvantages of Coffee

Not everything is milk and honey when it comes to coffee. The drink also has some counterindications and a few disadvantages.

Understanding Wine and Its Benefits

Fermented grapes fabricate an alcoholic beverage known as wine. Wine is the center of happiness. It helps in relaxing of the mind and brings smiles to faces. Moderate consumption of alcohol is pleasant for your physical health. There are many different types of wine, but the basic type of wine are red wine, white wine, rose wine, sparkling wine, and fortified wine.

We know a glass of wine is good for your health and these are some of the advantages of moderate wine consumption.

Drinking too much of any alcoholic drink is harmful to your health. Wine consumption may also have some of its disadvantages like addiction, fatty liver, liver cirrhosis, and several cancers.

Is It Advisable to Drink the Coffee-Wine Cocktail?

Infusing red wine with coffee beans is a common technique used in liquor joints or bar to come up with a cocktail. Where in most cases you add a stick of cinnamon and a touch of vermouth, this won’t be the first time wine and coffee has been combined to form a cocktail.

Mostly, coffee is added to wine to boost its flavor. The cocktail is more like wine, and the goal of the cocktail is for people to experience something giving them the means to enjoy the craftsmanship of the most skilled bartenders.

Different personalities have come up with this idea of coming up with unique cocktails into the market.

However, according to medical experts, mixing coffee - which contains caffeine - and wine is not good for your health as the mixture may provoke heart diseases and cause serious heart problems.

In recent days research by the Food and Drug Administration in America has stated that it's unhealthy to add caffeine beverages into alcohol. It is claimed that caffeine cause you to feel more alert and postpones that feeling of intoxication, which eventually leads you to drink more.

Nevertheless, the mixing of coffee and wine started a long way back in the 80s. The idea was implemented for the first time by monks in the United Kingdom who used to mix the two to form the caffeinated fortified wine long before the establishment of modern-day vodka and Red Bull.

In the modern day, the cocktail is known as Buckfast which was mostly consumed for medicinal purposes. At the Buckfast monastery, the drink is produced and consumed due to the endless love of this drink.

But this doesn’t mean it is less dangerous to mix coffee with wine. The caffeine in the coffee and other chemicals like sugars and alcohol can become poisonous to your body making it hard for your kidneys and liver to carry out their functions.

In conclusion, you are now aware that you should not drink coffee with or after alcohol, but you can make your own decision.

As much as wine-infused coffee sounds to be in a class of its own to rock the hell out of your world with the flavor and the tantalizing scent, in the long run, it's a health hazard.

Now, it up to you. Is wine and coffee drink a match made in heaven? Tastewise, it certainly is. Healthwise, you might be better off keeping that coffee away from wine – and away from any other alcoholic beverage, as a matter of fact.