Difference Between Red and White Wine
This post was updated on: August 1, 2020

Difference Between Red and White Wine 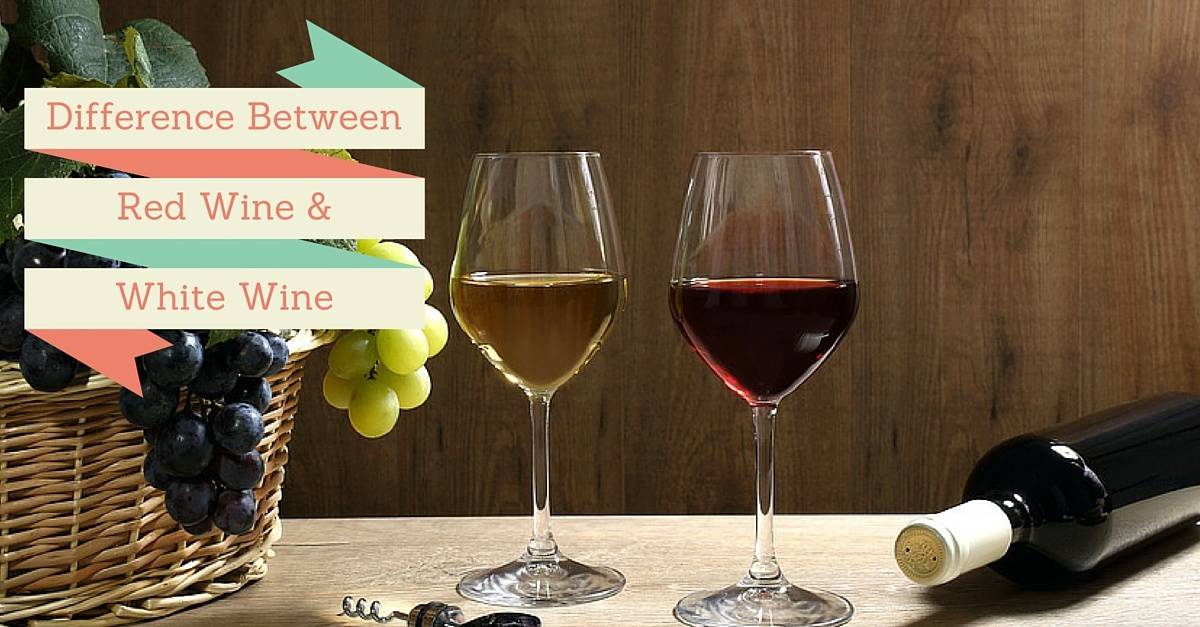 So perhaps you’re new to wine, or maybe you’re just curious and want to find out what the difference is between red and white wine? Well the answer is actually fairly simple.

The difference between red and white wine stems predominantly from a little component of wine called tannins that results in the difference of color. Red wine usually contains a much higher amount of tannins than white wine, which has an impact not only on the color, but also on the flavor and other characteristics of the wine.

Let’s start off by looking at how red and white wines are made, after which we can see what impact this has on the color, aroma, and other characteristics of the wine.

What’s the Difference in How They’re Made?

The main difference between red and white wines stems from how they’re made.

During the production of both wines, the solids are removed once the fermentation process is finished.

The fact that the red wine’s fermentation process included actual particles of the grapes, means that the resulting color is much redder as the juice has absorbed the tannins that are contained within these particles.

What are Tannins Anyway?

Tannins are a component that are found in the skin of grapes and also in the seeds. In fact, it’s not just present in grapes but also in many plants, seeds, bark, wood, leaves and other types of fruit skins. It’s a naturally occurring polyphenol that you likely (unknowingly) consume on a daily basis – tea for example contains a high tannin content and derives its color and characteristics from this substance.

In the wild, tannins play a role in protection from predation, and also regulate plant growth. They tend to have an astringent profile which causes a dry and puckery feeling in the mouth, which can be characteristic of some red wines that have a very high tannin content. Or once again, simply think of how black tea can taste without adding any sugar – it’s that dry feeling you sense on the middle of your tongue or the front of your mouth that is a result of the tannins.

Difference in Tannin Level between Red and White Wine

As I alluded to earlier, the level of tannins is generally much higher in red wines than it is in whites. This is due to the fact the skins of the grapes used to make red wine. These skins contain a much higher level of tannins, which transfers into the wine during the wine making process and results in their deep red color. It actually isn’t the grape juice that contributes to the color – as the grape juice is largely colorless both in grapes used for red and white wine.

When making white wines, it’s generally preferable to avoid higher levels of tannins and often times it’s just the grape juice that is used to make the wine. Fining agents are often further added to the wine to remove tannins as much as possible. When the tannins are removed, it results in a more transparent (or white) color that is characteristic of white wine.

Difference in Alcohol Content between Red and White Wine

In most cases, red wine will have a higher alcohol content than white wines. To explain why this is the case, you have to understand where the alcohol in wine comes from. The alcohol in the wine actually originates from the sugar that is present in the grapes which turns into alcohol during the fermentation process in wine making.

Difference in Body between Red and White Wine

Generally speaking, the majority of red wines will have more body (or mouthfeel) than white wines and this is because of three major factors: the alcohol content, the amount of tannins, and the process through which they are fermented.

We have discussed what impact the higher alcohol content and higher tannin level has on the wine, but not yet how the fermentation process impacts the wine. For red wine, generally the entire grapes are used in this process, whereas during the production of white wines only the juice is used.

This means that everything from the grapes’ seeds, stems, and skins are left on whole during the production of red wines. This results in a darker color (as a result of the high level of tannins in these parts of the grape) but also results in a heavier body and more mouthfeel than what white wines would have.

Difference in Flavor between Red and White Wine

It’s really difficult to generalize when it comes to analyzing the flavor of red or white wines since there are so many different types of each. However, for the purposes of this article, and as a general rule of thumb, red wines tend to be fuller bodied, richer, and have a more complex flavor profile. This includes flavors ranging from fruity, to spicy, and even meaty.

Whites, on the other hand, tend to be slightly more simple in taste profile. They are lighter, more floral, more crisp and often include hints of citrus and other fruits.

Did you know what the difference was between red and white wines? Let us know in the comments below. Exactly what the difference is between the two types of wines is not something we generally think about when we consume it, but is nonetheless interesting to know. Many people think it has to do with the actual color of the grape juice, while this actually does not contribute to it at all due to the fact that the juice itself has no color.

For further information, check out this video that gives some more detail on the differences between red and white wine.