Discover more about the 19 Crimes Red Blend wine which travels from Australia. Sweet, fruity and inviting, the soft flavors of this Shiraz are something special. 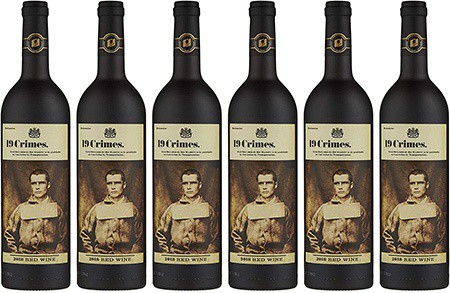 Elegant, sophisticated and refined…wine conjures up certain images regardless of yourfavorite tipple.

However, 19 Crimes Red Blend is a break from the norm, and awine that will challenge all your previously held beliefs about the drink which generally trades on its chic reputation.

Most wine reviews focus primarily on taste - and we’re going to do that too - 19 Crimes demands a little more.

Bold, defiant and modern, everything about this brand threatens to redefine wine drinking as you currently know it.

Some of the links below are affiliate links, meaning, at no additional cost to you, we may make a commission if you click through and make a purchase.

With such anunusual name, it’s the obvious starting point but it’s difficult to imaginewhat the reference might be - crimes?

However, there’s no subterfuge in thename; it’s exactly what it states. This wine has its essence buried in a criminal past.

The 19 Crimes Red Blend is an Australian wine, and herein lies the clue. This wine - and all of the others in the 19 Crimes stable - are based on the convicts who weresentenced to transportation to Australia.

A long, arduous and high-risk journeyawaited these criminals who were all convicted of petty crimes. For those thatmade it, a new life as colonists awaited but the perils were such that only thetoughest survived.

It’s these rugged men than 19 Crimes doffs its cap to, paying tribute to each and every one.

However, this is no generic lip service: on each and every bottle you’ll find yourself staring into the baleful eyes of one of the criminals. Each of thewines is dedicated to one of the men, and 19 Crimes wants you to hear theirstory.

However, it’s worth mentioning that 19 Crimes are so invested in this brand image that they’ve covered off even the tiniest detail.

When you pop open your bottle, don’t just toss the cork: take a closer look. Every cork is printed with one of the crimes which is only visible once the bottle is opened: which one will you get?

Next: Discover why Kung Fu Girl Riesling is different from your typical American Riesling.

Out of the 165,000 convicts who were sentenced to cross the ocean for their crimes, The Red Blend has chosen John Boyle O’Reilly’s story to celebrate.

With his earnest face and serious expression clearly depicted in sepia tones, he’s not what you expect a hardened criminal to look like.

It’s fair to say that O’Reilly wasn’t the worst of criminals and was handed a pretty rough deal when he was transported to Australia.

His crime was simply for belonging to theIrish Republican Brotherhood, also known as the Fenians. A republican, anti-monarchy group whose goal was to unite Ireland, the Fenians were apolitical body and O’Reilly an active member.

Belonging to this organization as a youth was enough to see O’Reilly sent to live in Australia as a punishment, ripped at a tender age from all he knew.

However, this tough youngster not only survived the journey - a feat in itself - but he later went on to escape Australia and made the journey to live as a free man in the US.

Once in America, he returned to his role as an activist, speaking out for his culture and theIrish community and taking up the position of editor at The Pilot newspaper. With his lectures, speeches and writing, O’Reilly became one of the most prominent spokesmen of his time.

Look again at the portrait on the bottle and you’ll see the fierce determination, and the spirit that never yields. This is what 19 Crimes is all about and this is why you’ll want to drink the wine. 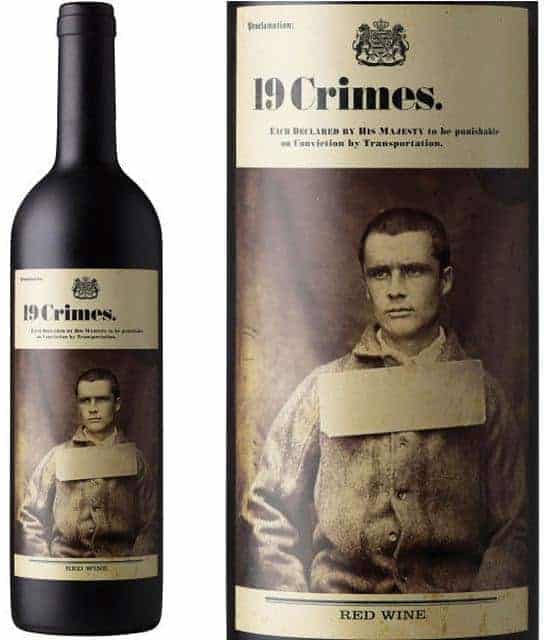 More than an image

With such a strong brand, it’s easy to almost forget about the wine itself. After all, the label and story is designed to appeal to a new market of millennial males who might feel otherwise excluded by traditional wine marketing.

Nevertheless,there’s still plenty to commend this wine, even if you set aside the strongdesign and imagery.

Based on a Shiraz, The Red Blend is a semi-dry wine and it’s probably fair to concede that it’s not one that will shake your world. There’s nothing that’s utterly mind-blowing or life-changing about this wine and it probably won’t win anyawards.

Does this meanit’s a bad wine? Certainly not! It’s actually rather delightful, even if it’s not the most original out there on the market. Pick up a bottle or two of this, and if you’re a fan of sweeter wines, you’ll be very pleased with your choice.

Here’s more about what you should know.

A sniff and a swirl of this wine will reveal a jammy sweet wine that’s loaded with tones of vanilla and chocolate.

If you don’t like sweeter flavors, you’re unlikely toget along with this wine. However, if you are fond of sweet and ripe-tastingwines, this one could be a winner.

Although it’s nota pure Shiraz, the integrity of the structure is retained, along with a bit of added sweetness. You might notice a sour cherry at the start before moving onto a cooling raspberry with a semi-dry finish.

It’s a medium-bodied wine that doesn’t have any tannins but nevertheless stilldelivers a juicy, lingering taste.

It pairs well with Italian food, especially meat such as bolognese and lasagna. How you choose to drink it is up to you but you mightwant to try it chilled, as you would a Sangria, rather than drinking it at room temperature like a traditional red.

Next: Here's a comprehensive guide on your favorite Petite Sirah wine.

Fascinating flavors at a good price

The Red Blend is a wine with a very specific profile that was created after a lot of carefulmarket research. Sweet, juicy and fruity, it’s got some extremely pleasing flavors that would sit just as well with a much more expensive bottle.

Although it’shard to see past the stark 'wanted' posters and black glass, this wine is far more than just a marketing gimmick for millennials.

Syrupy and with a hint of oak, every mouthful is soft and lingering which is why it scores such a hit with most of the 19 Crimes wine reviews you'll come across.

5 Reasons You Need a Wine Aerator