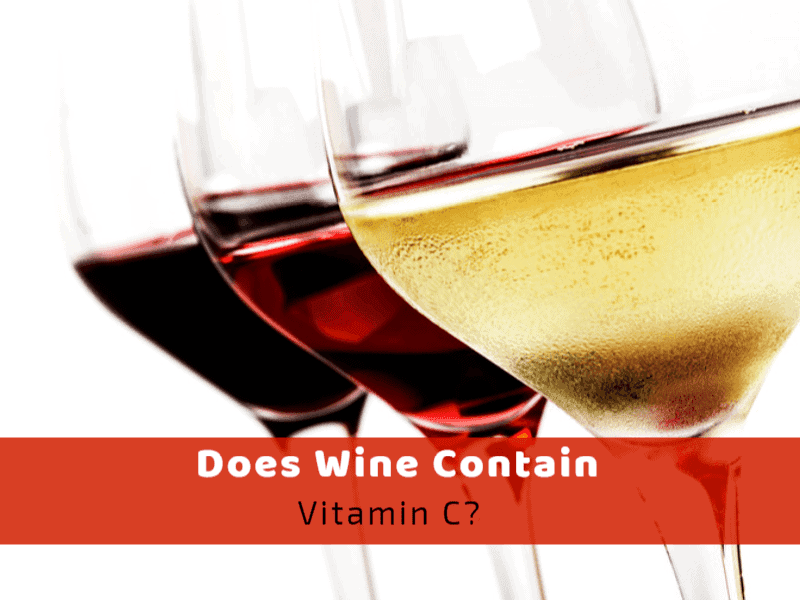 Among the merits, wine cannot boast that of being a vitamin drink. However, it is true that the wine contains a certain content, albeit modest, of vitamins derived from grapes. The grape, in fact, like almost all the fruit, contains different types of vitamins and precisely vitamin C, mainly, but there are also the ten vitamins of group B, and other healthy substances grape contains. But the question is, do they transfer to wine? ​Does wine contain vitamin C​​​?

In the transition from must to wine, the already low content of vitamins decreases considerably, so much so as not being possible to give any vitamin contribution to the diet, but the few vitamins present are useful factors for the regular development of alcoholic fermentation, or yeast activity.

In other words, wine doesn’t contain vitamin C. This doesn’t mean however that wine is unhealthy. On the contrary. In small doses, wine is beneficial to your health.

What are the effects of wine on the cardio-circulatory system? What are the antioxidant properties? The studies carried out show the beneficial and preventive action that red wine has, over other alcoholic beverages, on atherosclerotic coronary arteries and not only.

That wine has beneficial properties on human health has been known for centuries and the use of this beverage in its pharmaceutical form or as a vehicle for drugs of natural origin (alcohol, in fact, extracts many of the active ingredients from plants) has always been the subject of heated debate, nurtured by the fact that the benefits of wine are combined with toxicity and the negative effects of ethanol.

Recently though, numerous laboratory researches have been carried out which, together with statistical surveys carried out on millions of subjects belonging to different populations and with different habits of life and diet, have allowed to highlight the actual relevance of the beneficial action of wine and to identify the responsible compounds.

The attention of scholars has focused on the effect that wine (red in particular) has on the cardio-circulatory system.

Half of the deaths in the US are caused by arteriosclerosis; this is a direct result of the extremely rich diet.

The beneficial effects of ethanol on the prevention of coronary artery disease have long been known. A particular situation is represented by the red wine, in fact, to the actions of the ethanol contained in it, there are also beneficial effects for the cardio-circulatory system, due to some peculiar components of the wine.

Unlike other alcoholic beverages, wines contain a great variety of compounds that give the wine itself the typical individuality and nobility. Some of these compounds are secondary products of alcoholic fermentation; others were already present in the grapes or in the wood of the wine barrels.

The red wines are much richer in these compounds than the whites, both because the grapes contain higher amounts of these substances and because the grape skins remain in contact with the must for a longer time.

Wine Polyphenols And Their Importance 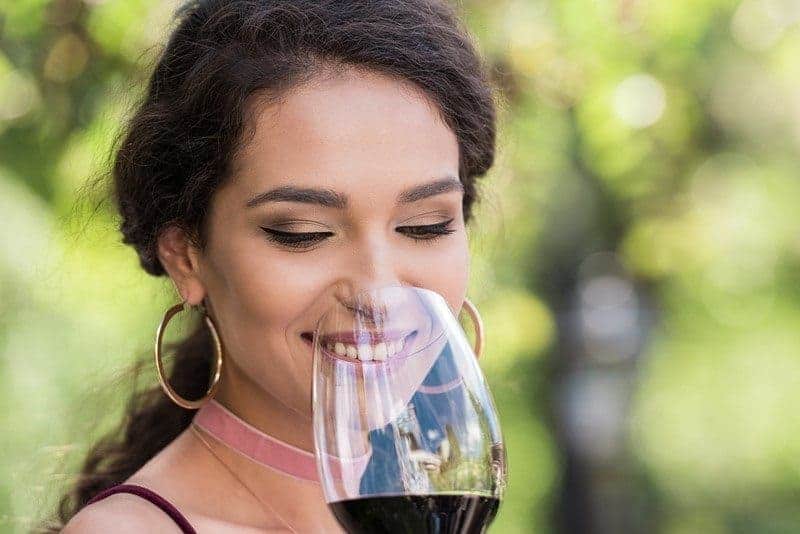 Red wines contain numerous polyphenolic compounds that are organoleptically revealed with the astringent sensation in the mouth. These polyphenols include the flavonoids, the flavonols, the anthocyanins, and the soluble tannins, all compounds having antioxidative properties.

These properties are particularly effective in reducing LDL lipoproteins, protecting the integrity of their unsaturated lipid compounds. As a consequence, the ability of LDL to start the formation of atherogenic plaque decreases.

The first experiment in this direction was carried out in 1981 by Klurfeld and Kritchevsky. At the end of the experiment, it turned out that the controls and the rabbits treated with ,beer showed serious atherosclerotic lesions in correspondence of the aorta and of the major blood vessels.

The antioxidative property of the phenols was highlighted by Frankel et al. by measuring the hexanal and conjugated dienes that are formed by oxidation, catalyzed by copper ions, of the newly prepared human LDL.

In these experiments, the antioxidative action of the wine polyphenols was the same as that of the oak tina and much higher than that of the vitamin E, the antioxidant vitamin factor commonly used as a supplement in the nutrition and prophylaxis of coronary diseases.

Another component of considerable biological and medical interest is the resveratrol (3,4, 5-trihydroxystilbene) present in red wines, but not in white wines, in variable but consistent quantities, both in the trans and cis form and also in the glucoside form.

The hydrolysis of the resveratrol glucosides in the intestinal tract allows the bioavailability of this compound to a much greater extent than previously thought. Resveratrol is synthesized by Vitìs Vinifera and is present in the grape skin. As mentioned above, this is kept much longer in the fermentation liquid of red wines than in white wines, which explains the greater richness of these compounds in red wines.

Recent studies have shown that resveratrol has interesting properties; it is an inhibitor of platelet aggregation, of the protein-tyrosine kinase and is an efficient antioxidant for LDL.

Scientists have recently confirmed the antiaggregant platelet action of resveratrol and have found that it is enhanced by the other components of red wine. The antiplatelet activity and the antioxidant activity on the LDL indicate the importance of this compound in wine. By virtue of the presence of resveratrol and polyphenols, red wine exerts a more accentuated action on HDL and oxidation of LDL than other ethanol and white wine.

A suggestive and convincing interpretation of why such an intense antiplatelet action occurs in red wine has been formulated by scientists who have advanced the hypothesis that this was due to the high salicylate content of red wine of about 30 mg / liter.

At these doses, salicylates, compounds with marked antiplatelet activity, are used, in the form of aspirin, in the prophylaxis of coronary artery disease. However, subsequent research has weakened this hypothesis; in fact, it has been shown that the content of salicylates in wine is actually lower, not exceeding 0.7 mg / liter.

The Antioxidative Action of Wine 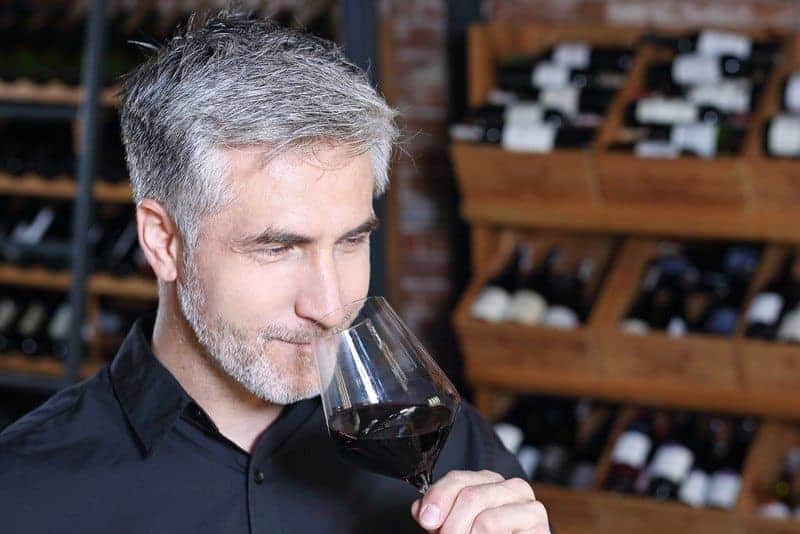 The first beings appeared on earth when the atmosphere was devoid or very low in oxygen. They were anaerobic micro-organisms capable of living in the absence of oxygen. As oxygen appeared in the atmosphere, as a result of the photosynthetic action of some microorganisms, anaerobic beings evolved into aerobics.

Some of the anaerobes have however survived in suitable conditions, for instance, sheltered from the oxygen which is a toxic form for them.

Despite these evolutionary processes, even in aerobic organisms, including humans, the damage is found when the concentration of oxygen exceeds 21%.

An example of this damage is the ocular pathologies that occurred, until recently, in prematurely born children.

These damages are also identifiable in fibroblasts, which consists of the formation of fibrous tissue on the posterior surface of the eye, and this is a direct consequence of the high pressure of oxygen which until recently was used in the incubators.

Oxygen is potentially toxic even at normal pressures since it can generate the so-called "oxygen free radicals," discovered in 1954 by Gershman. These are short-lived but highly damaging chemical species.

The organisms have evolved creating systems of protection against such harmful compounds, which are largely eliminated. When such intrinsic protections of the organism are not sufficient, it is appropriate to resort to particular exogenous antioxidant compounds, usually present in a balanced diet, such as vitamins C and E and carotenes.

Notable antioxidant properties are also found in the  red wine, and this is certainly another important and beneficial aspect of consuming it.

From what has been said, it is clear that alcoholic beverages and wine, in particular, have an effective preventive action on atherosclerotic crown-rats. The greater effectiveness of red wine in this regard, compared to other alcoholic beverages and pure alcohol, is due to its peculiar compounds deriving from fermentation reactions or from the skin of black grapes.

These compounds are endowed with beneficial actions on the vessels and enhance the already positive action of the ethanol. These compounds are also contained in fruits and vegetables but in smaller quantities and more difficult to absorb than in wine.

The protective action of the wine on the cardio-circulatory system can be summarized as follows; increased plasma HDL, decreased LDL oxidation, reduced platelet aggregation and increased fibrinolysis for increased production of tissue plasminogen activator.

The data presented shows how a diet containing a couple of glasses of wine a day, preferably taken during meals, leads to undoubted benefits, certainly not for those who do not tolerate alcohol. In this regard, doctors often recommend to patients, along with proper physical activity, a balanced diet that also includes two glasses of wine a day. At the same time, the doctor should inform the patient about the consequences of alcohol abuse.

While I’m no scientist in biomedicine and biochemistry, the studies above have truly convinced me of the multiple benefits of wine, and red wine in particular. Wine may not have vitamin C, but it surely has multiple other compounds that justify sipping a glass while watching your favorite show, during dinner, or at a gathering with friends.

I’m not sure if this is a good enough reason for you to get started with drinking wine, but if all the above isn’t, I really don’t know what is!