What Is Kalimotxo: A Delicious Cocktail With Red Wine And Coke - Wine Turtle

What Is Kalimotxo: A Delicious Cocktail With Red Wine And Coke

What Is Kalimotxo: A Delicious Cocktail With Red Wine And Coke 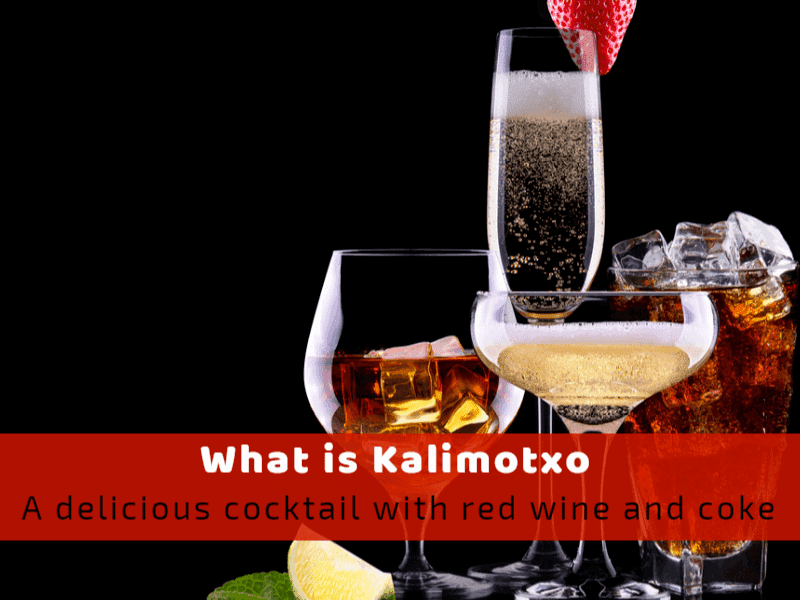 Have you ever heard of the so-called saving hangover drink? Have you ever wondered what is kalimotxo and how it is made?

This delicious cocktail with red wine and coke is one of the most beloved drinks of Spain. Its name comes from the Basque kalimotxo,  and the drink is also known as Rioja Libre , Kali, and Motxo.

In Spanish, its name is calimocho, but regardless of how you name it, the kalimotxo is an alcoholic drink typical of the Basque Country typically consumed by teens and young adults who gather in the streets and prepare the drinks with ingredients carried from home.

In the rest of the world, kalimotxo is not widespread, and definitely less famous than Sangria. Nevertheless, those who tried it have learned to appreciate it.

This delicious cocktail called kalimotxo was probably born in the north of Spain, more precisely in the Basque Country, and it subsequently spread throughout the Iberian nation, then extended beyond the Spanish national borders.

The story, which distinguishes the birth, tells that two gentlemen named Kali and Motxo used to drink lots of red wine. One day they are surprised by a bartender who lightens the alcohol content of the wine mixing it with cola.

These two gentlemen didn’t mind this delicious union of flavors, and since then, the calimocho spread like wildfire first in the region, then beyond the Iberian borders.

This is, of course, the unofficial story that stands behind this beverage. It doesn’t have precise historical references, but it’s credible enough to make it truthful.

Today this drink is a source of pride for all the Basque people who never fail to give their guest the opportunity to drink a good glass of kalimotxo.

Kalimotxo: A More Than Simple Recipe

If the story surprised you and made you curious about tasting the drink, you needn’t worry. You don’t have to start searching for a cheap flight ticket to Spain. You can prepare the drink in your own kitchen or backyard. All you need is – you guessed it – red wine and coca cola.

Because the kalimotxo is a fresh cocktail that consists of 50% of wine and 50% of cola. There is also a more aggressive and economic variant called Morta which consists in mixing a can of coke directly with a box of wine.

Another variant, instead, is called Kalizer and involves the union of beer and calimocho in the proportions of 50% beer and 50% calimocho or 25% beer and 75% calimocho.

For many wine lovers, it would seem a real sacrilege to mix the winemaking tradition with coca cola. However, there are many connoisseurs who do not despise it.

Because in the end, a sip of kalimotxo is like a trip to the Basque Country. After all, who wouldn’t love a walk on the sunny streets of Bilbao or San Sebastian?

Therefore, let's try our hand at tasting this simple and cheap drink, whether it is in the warm Iberian Peninsula or simply in the confines of our land.

Kalimotxo and Tinto de Verano: What Is The Difference Between Them?

If you’ve ever been to Spain, perhaps the story of kalimotxo awakened different memories. Another beloved Spanish drink that resembles this cocktail is Tinto de Verano, but there are clear differences between them.

As highlighted above, kalimotxo is nothing more than a cocktail obtained by mixing red wine and coca cola . The origin of the calimocho is still rather uncertain, but let's clear our ideas a little bit.

The term calimocho derives from the Basque word  kalimotxo even if, according to the book "El invento del kalimotxo y anécdotas de las fiestas," the creators of the word declared that the name was not assigned to a new invention and that the cocktail was originally called Rioja Libre.

The same book also clarifies that kalimotxo was of a very exclusivist drink, appreciated only by the lords of Bilbao and in particular by stockbrokers.

According to some sources though, it seems that the Basques were not even the inventors of this drink but that in the twentieth century, some Italian immigrants in America discovered that mixing Coca Cola with their Chianti wine would dilute the latter, allowing them to drink more before actually getting drunk.

At the same time, the caffeine content of the cola diminished the “drunk” symptoms.

Now, it's hard to say if it's really true or not, and the Basque people will probably not be too happy by hearing this version of the story. In the end, no matter where the kalimotxo was invented, this drink surely is one to make heads turn.

What Is Tinto de Verano?

Tinto de Verano is not very different from the calimocho apart from the fact that, instead of the coca cola, it is obtained by mixing red wine with sparkling water or soda. Even the history of the Tinto de Verano is rather old and, it seems, it dates back to the early years of the '900.

According to the legend, at the beginning of the twentieth century, there was a restaurant in Cordoba , located in a point of Carretera del Brillante, in front of the road that led to Cañito Bazan (now Avenida de la Arruzafa), located in the north western part of the city that was frequented by famous guitarists and singers and also had a school of bullfighting.

Venta de Vargas began to be called in honor of the name of its owner, Antonio Vargas del Moral, and on warm afternoons and summer evenings the people of Cordoba liked to go and cool off with a glass of red wine and soda, which soon became known by the name of the place: "Let's go to the Brilliant to have a Vargas!"

Moreover, the origin of the name Vargas could derive from the request of a Valdepeñas, a type of wine produced in the Castilla-La Mancha region, with a carbonated drink which, shortened, would give rise to "Val-gas" and, by derivation, the "l" would become "r" becoming therefore Vargas.

Even today, Vargas is the original name of the cocktail even if the fact that it was consumed mainly in the summer has then decreed its definitive name, the tinto de verano or, how it would be translated, the red (wine) of the summer.

Lambrusco: A Perfect Substitute of Kalimotxo

Okay. Perhaps you’re one of those wine lovers who consider it blasphemy to mix wine with either soda or cola. So, what do Spanish people drink when they don’t drink kalimotxo or tinto de verano?

Well, although Spain is a country full of delicious wines, most of them lack the delicacy of a light, fresh, summer wine. Maybe that’s why they’ve come up with so many substitutes, including Sangria, Kalimotxo, and Tinto de Verano.

But if you happen to walk down the aisle in a supermarket or wine shop, or even if you decide to eat out, you’ll notice everywhere is sold or proposed an exquisite Italian wine which is almost unknown outside the borders of its country.

What I discovered during my trips to Spain is that Lambrusco reminds people in this country of their adolescence.

The confirmation comes from a famous Spanish sommelier, wine connoisseur, and journalist, Meritxell Falgueras. According to him, the preference for Lambrusco derives from the fact that Spanish people are accustomed to drinking sodas and fruit-flavored carbonated drinks.

As such, it is normal that Spanish teens turning into adults choose as their first alcoholic beverage a light, sweet, and sparkling wine. Fruity notes are essential, and so is the freshness of the beverage, especially during summer.

Moreover, Lambrusco is cheap. These are the characteristics that made this wine a real bestseller in the peninsula. In other words, the Spaniards prefer to drink wine that reminds them of the deliciously fresh Kalimotxo and Tinto de Verano, the two exquisite cocktails. Wine with the same consistency, texture, and coolness as a beverage based on wine and cola or wine and soda.

Kalimotxo is perhaps the most unpretentious cocktail out there. All you need is a bottle of cheap wine and one of coke to create a refreshing drink capable of soothing your spirit and enhancing your mood. If wine and coke, just like wine and coffee, is not something that appeals to you, maybe a Tinto de Verano will do.

Or, why not, just pour yourself a glass of Lambrusco if mixing wine with either ingredient seems like blasphemy to you. Regardless of your choice, what matters, in the end, is the appreciation of the exquisite beverage that is wine, and celebrate it as it deserves, in all of its forms. Cheers!