Can You Mix Red And White Wine? What Does It Taste Like? - Wine Turtle

Can You Mix Red And White Wine? What Does It Taste Like?

Can You Mix Red And White Wine? What Does It Taste Like? 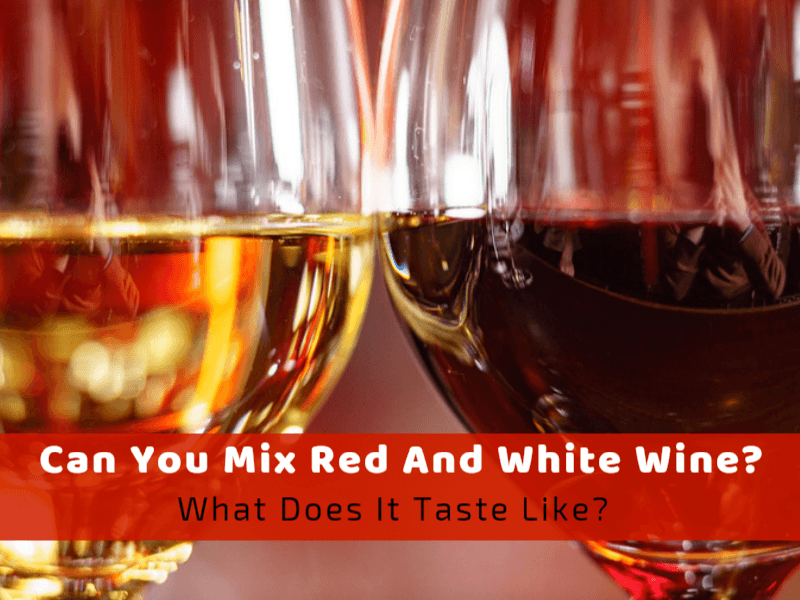 Drinking white wine after red wine or vice versa, or even worse, mixing two wines in the same glass is often seen as blasphemy. But are we sure it’s a heretical madness to mix different wines? As a consumer, I mean, not as a winemaker – since the latter mixes wines as part of their job. In the end, can you mix red and white wine? And what does it taste like?

The more time passes, and the more time I spend in the company of wine pros, the more I am convinced that mixing wines is the way to go and not a profaning of a sacred drink. Therefore, you can indeed mix red and white wine or just serve them separately during a meal.

Why? Because there is no scientific evidence to prohibit it. And because sometimes, mixing wines could give you a tastier product in your glass.

Wine mixing is not something new. Winemakers have been mixing wines since the dawn of times. Many interesting wines on the market are a result of mixing; they are just referred to with the fancier name “blend.”

A wine blend could mean two things. Either that the wine is made from various grapes, or that a determined wine has been mixed with another wine made from another type of grapes. Either way, the result is often delicious, and I don’t remember ever seeing anyone complaining they have a wine blend in their glass.

So, what makes us believe that mixing wines at home, directly in the glass, is blasphemy?

The truth is that wines can often go bad if stored improperly. They won’t harm you, but they will taste disgusting. But what if a wine of a certain caliber has gone bad due to improper storage? Will you just throw away a few hundred dollars?

Of course not! You’ll do your best to make the most out of it by mixing it with a cheaper yet younger wine to improve its taste.

For instance, you could revive an outdated Barbaroso by mixing it with a bit of Nebbiolo.

At the same time you can reassume a wine too tannic, or too acidic, or too soft, with an antagonist that counterbalances the deficiencies: a southern white that is too alcoholic acquires freshness  when mixed with a cold Blanc de Morgex; a too angular Nordic red gains winding and balance when it’s expertly fused with a warmer red and with hints of fruit. And so on.

I arrive to hope, for the indignant horror of the purists, that a barman expert in wines cocktails, could easily create new and unexpected accords and aromatic shades by mixing red and white wine.

And what about the respect for the unique personality of the individual wine? How can you disfigure it, without letting it carry out its parable of life by itself? I hear you screaming.

Quite right. I don’t want to push myself to the point of considering any mixing to be lawful. So let's put it this way: if you have enough bottles, you can do some innocent experiments by mixing red with red, white with white, red with white, and still with sparkling, and judge it for yourself.

It’s hard to say how that blend of red and white wine will taste like. It depends on the characteristics of each wine, and their prevailing flavors. A very delicate white mixed with a bold red will probably never express its aromas, but will somehow dilute the boldness of the red.

A sweet red mixed with a dry white will become drier. Or vice versa.

As a general rule, the red wine tends to prevail over the white due to the higher concentration of tannins and aromatic compounds. This isn’t necessarily a rule though. For instance, an aged Chardonnay may prevail over a very young red wine.

Can You Serve Red After White or Vice Versa?

Another of the most common clichés about wine is that you can’t have red wine and white wine at the same sitting.

We all know that there is much more than one could imagine behind the art of pairing food and wine. So, what if one of your dishes goes with red and another one with white wine? Should play safe and go for the beer?

Again, of course not! Because nobody says, you can’t have both red and white wines on the table. And those who do claim you can’t, should learn more about wines and how to pair them with food.

In fact, during the years, I have heard various bizarre theories regarding wine.  Such as that drinking wines in a certain order will not make you sick, or  that you should start with the less alcoholic and continue by increasing the gradation of alcohol but never decreasing it. Otherwise, you’ll end up with headaches when waking up in the following morning.

Now, I’m not a medical expert, but fortunately, none of this is true.

It has never been shown that mixing red with white wine is likely to be bad because there are no substances that can come into conflict. The only wise advice that you could use is to moderate the amount of wine you’re drinking.

And if you’re wondering if this is true, just think of the professional wine tasters. People who, for work and without feeling bad, taste twenty, thirty or even forty wines a day. Not in large quantities, obviously, but in all sorts of styles and varieties.

What this means is that it’s completely safe to serve as many wines as you like during a meal, as long as you moderate the quantity poured in the glass.

My only advice is to drink slowly, trying to pay attention to the characteristics of the wine, so as to appreciate it, and limiting the glasses.

Other Wine Myths to Debunk

Besides the myth that you can’t mix red and white wine, or serve them together, there are many other popular myths around this popular drink. Here are some of them, and the truth that lays behind.

Wine is good for your blood

Nothing falser. Perhaps you’ve heard it dozens of times, especially when red wine is involved. But in truth, wine does nothing good for your blood. Despite of the many health benefits of wine, when it comes to blood, the drink is majorly responsible for causing anemia.

For this reason, the recommendation is to consume it in moderation: if we talk about 125ml glasses, you should drink no more than two-three per day if you’re a man and no more than one-two if you’re a woman, preferably during meals.

Fish goes with white wine only

The fish can be even better if combined with suitable red wines: a little acidic, with few tannins and not excessively full-bodied.

Some Nero d'Avola goes well with a slice of browned tuna, salmon or with rich fish soups, while a sea bream or a baked sea bass is excellent when accompanied by a Pinot Noir. The same goes for a young Chianti with tomato-based seafood sauces, a young Merlot with deep fried fish, or a Syrah with red mullet fillets or eel.

Red should be served at room temperature

So do not hesitate to put the red wine in the wine cooler before bringing it to the table or asking for the ice bucket in the restaurant.

On the other hand, in regards to white wines, do not overdo it with cold, as you risk of altering typical aromas and flavors. In fact, the aromas are attenuated around 52°F and are almost not felt below 46°F.

Put a teaspoon in the bottle to preserve sparkling wine

According to a popular belief, to maintain the effervescence of an open bottle of sparkling wine, we should insert the handle of a teaspoon into the neck of the bottle. This would have the power to preserve the bubbles longer, avoiding the dispersion of the gases.

However, before starting to hit your head on the wall due to desperation, know that the method doesn’t work. The only way to preserve the wine is by capping the bottle with a wine stopper, which prevents the dispersion of the bubbles.

And now that you know mixing red with white wine is perfectly doable, what are you waiting for. Mix your favorite beverages and see what comes up. After all, you could just discover a new exquisite blend – and maybe even get famous thanks to it. Cheers!