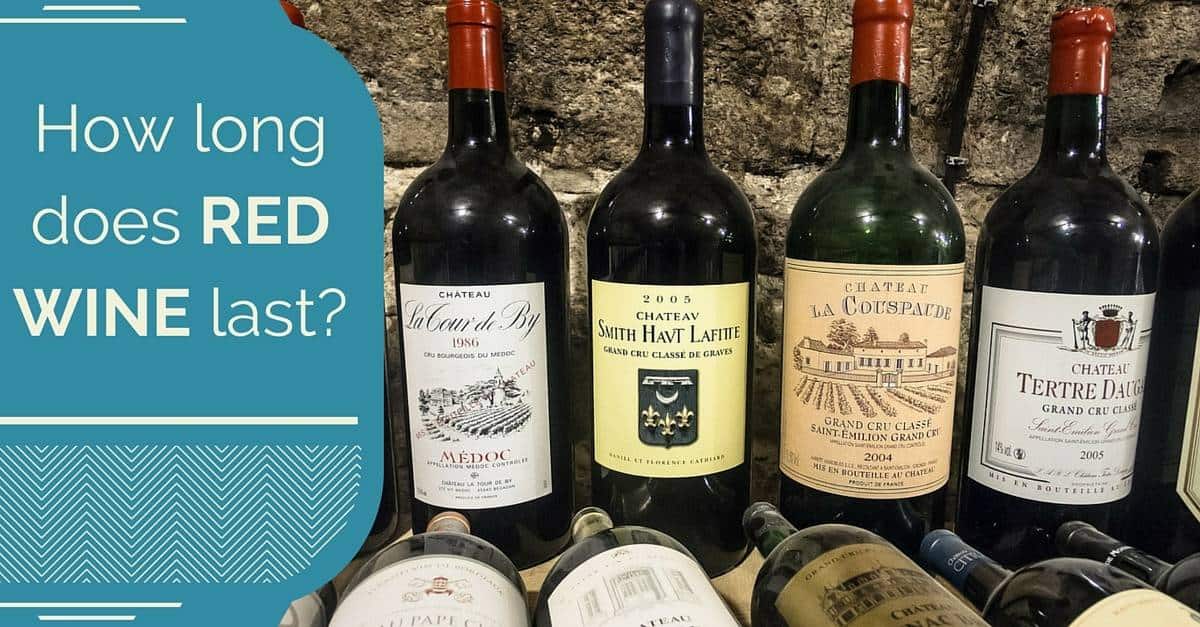 So you’ve bought a nice bottle of red wine and you’re wondering how long it lasts (opened or unopened) or whether it goes bad? Or perhaps you were given one as a present that you have had for over a year by now and don’t know whether it is still safe to drink.

Unfortunately there isn’t a straight answer to how long red wine lasts; it depends largely on whether the bottle was opened or unopened or the type of wine. Whether you're drinking a cabernet sauvignon, pinot noir, malbec, shiraz, zinfandel, tempranillo or a merlot the below information will apply to you.

Having said that, the numbers below are a good general rule of thumb to follow when it comes to red wines that are opened and unopened.

How long does red wine last?

Once you open your wine red wine you generally want to finish it the same day, or latest within 2-3 days from when you opened the bottle. The reason isn’t so much because the wine is unsafe to drink after, but just that it will start to taste very “vinegary” (is that even a word?) after and in most cases will be very unpleasant on the palate.

If you’re interested as to why this happens, keep in reading as I’ll go into a little more detail on this later in the article. I’ll also give you a suggestion as to how you can extend the life of your wine after you’ve opened it to be able to enjoy it a little bit longer.

What happens when wine goes bad?

Without getting too technical, the fact that your wine develops a very sour and vinegary taste after it has been opened and not consumed within a number of days is because of the process called oxidation.

Once you wine comes into contact with air molecules it comes oxidized. Not only will this result in the loss of flavor and for it to develop a very sour and bitter taste, it can also have an impact on its appearance. Wines that are oxidized will generally lose their brightness by turning from a bright red into a brick or brown colored wines.

There are also a number of other reasons why your wine may have gone bad, and you can check out our article where we discuss the most frequent reasons as to why it has gone bad, and the smells that are associated with it.

How can I extend the life of my wine after it has been opened?

Although nothing will be able to extend the life of your wine indefinitely, there’s one tool that can help you keep an opened bottle for at least a week or more. This tool is called a wine preserving tool, such as the VacuVin Winesaver.

This tool is essentially a little pump with a bottle stopper that allows you to suck the air out of the bottle after you put the bottle stopper on and essentially creating a vacuum. It’s this air that results in the oxidation of the wine. In other words, the less air that remains in your bottle after you close it, the less quickly your wine will oxidize. It’s a handy little tool that every wine lover (new or old) should have in their arsenal. 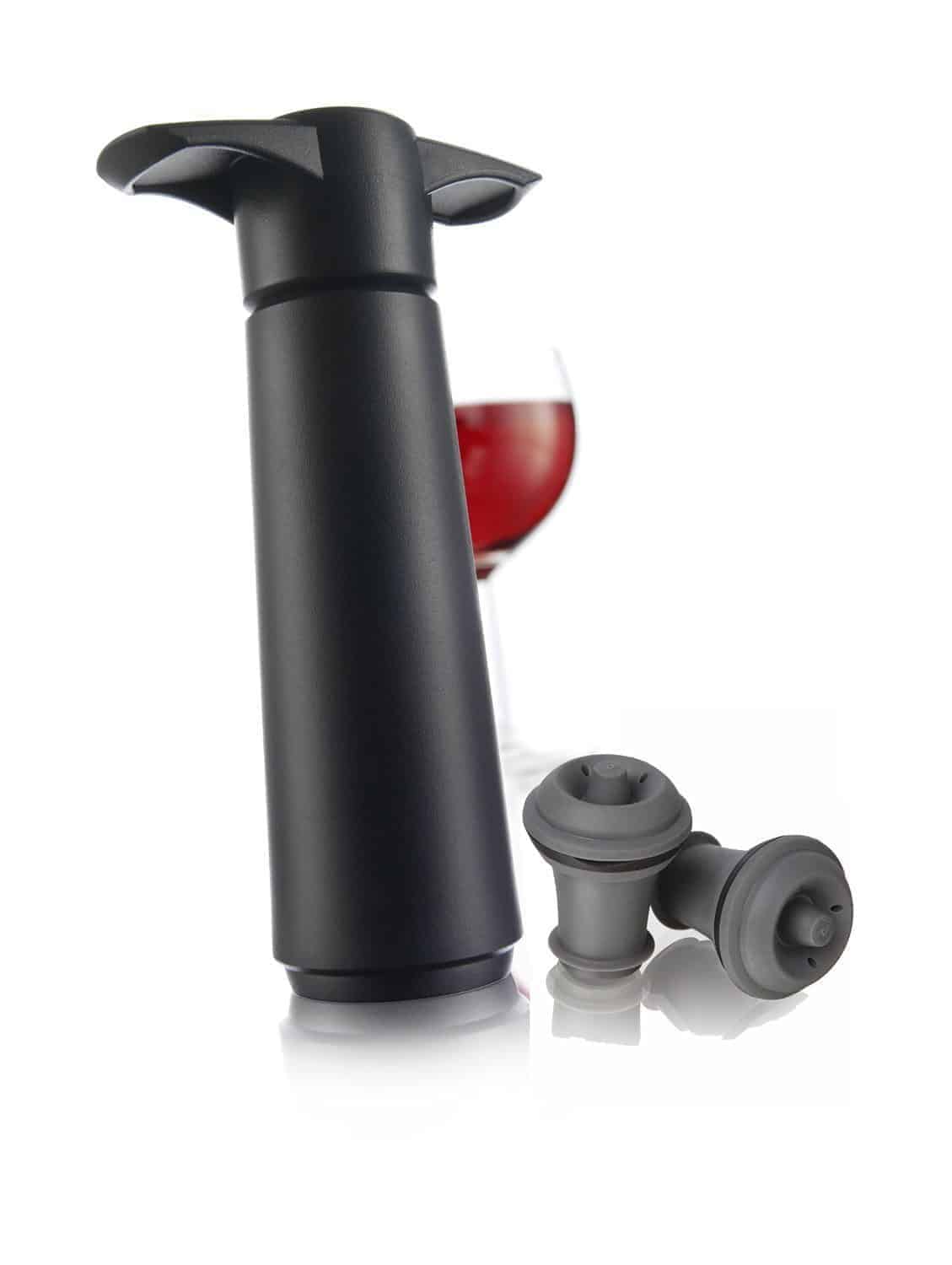 Unless you’re the type that finishes a bottle per sitting (which I admit I do on occasion), this tool will let you preserve your wine for at least a week rather than having to chuck it out the next day or two. It’s also pretty affordable and should pay for itself pretty quickly as you won’t be wasting as much wine. No one likes to waste wine!

On the contrary, when your red wine is unopened it will last for years and years and will sometimes even get better with time. This is essentially called ageing wine and is a practice usually done for very expensive bottles of wine. As long as the wine is stored properly during this process, some connoisseurs feel that this process allows the wine to develop its full flavor and aroma.

Having said that, generally speaking I wouldn’t worry too much about red wine lasting when the bottle is unopened. It should be fine for years and years to come although the profile might change slightly – it is more the opened wine that you should worry about.

There are a number of ways to tell if your wine has gone bad either by looking at it, smelling it, and/or tasting it (if you dare!).

So to wrap it up, it all up it’s best to consume your red wine within a number of days if you have opened the bottle while you can probably keep it for years if you leave it unopened (as long as its stored in the proper conditions of course).

Have you had any experiences with wine that has gone bad? I’d love to hear from you and your story, so make sure you drop a comment below.

i have a bottle of hardys cabernets 2004 vintage and was wondering if it was still ok.

Hi, are you only talking about corked red wine?

Hi I have some very nice wines which I have collected over the years , I’m u decided whether I could drink these or not, they have always laid on their side on a wine rack. The reason I’ve not tasted them is that when I’ve bought red wine I stack it on top so it’s always the new ones that get drunk.
Looking forward to hear what you have to say.
Best regards Barbara Lampe

I have a open bottle of red wine for 2 yrs in the refrigerator will it make me sick if I have s glass ?

Cool. That’s some great info. Keep up the good work.

So I drank this wine that had no cork in it for 5 year and only aluminum foil over the top. It tasted like regular red wine but looked like someone took a liquid shit in a bottle and added period blood for color. I asked everyone if it was safe but no one would reply to me quick enough so I drank more than 50% of the bottle until a friend told me not to and now it’s to late. Am I gonna die or what consequence will this have on my body

I drink red wine that has been opened 7-10 days and I can’t tell the difference from when it first was opened. It does not turn brown or smell, taste “vinegary” that soon after opening. I think red wine can last up to 2 weeks after opening, not just 2 days. Just my personal opinion.